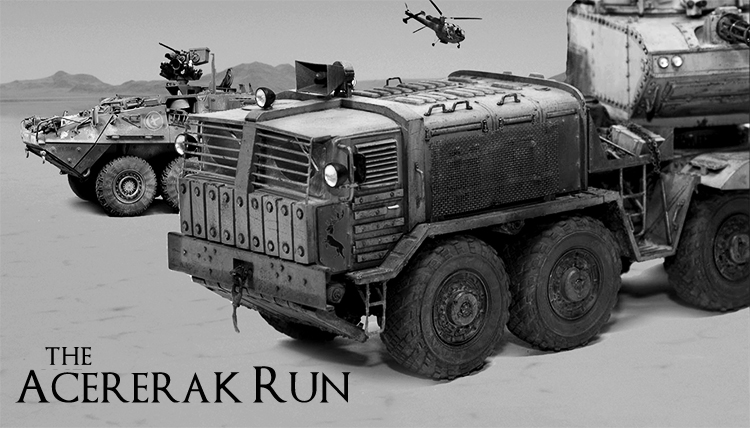 I was wiping vomit off my face when Serjeant Hunt clambered up from his hatch, wide-eyed, and blinking. The bloody snot smeared across his face was his. The gore splashed across his helmet, and the side of his truck, was not.

I was wiping vomit off my face when Serjeant Hunt1 clambered up from his hatch, wide-eyed, and blinking. He doffed his CVC helmet, ran a shaking hand through his hair, and muttered.

The bloody snot smeared across his face was his. The gore splashed across his helmet, and the side of his truck, was not. When the air guards finally stood up they looked no better, and at least one of them was worse off than me. At least I’d gotten the ramp down before I puked.

It was a wonder any of the vehicles had managed to crawl into the improvised cantonment area at all given the beating they’d taken. The ugly old helos that had shown up at the last minute to save us weren’t much better. Hell, they looked like maybe they’d been ready to drop out of the sky before they got shot to shit.

Serjeant Hunt hit the ground, stood leaning on the truck next to what was left of its sigil, shaking his head in disbelief. Seven of his tires were flat. One was missing. The truck’s badge, a dun stag dead and bound and slung beneath a pole2, had been chewed almost all away by small arms fire. It as the same with every vic in the place. Here the rust red warhorse of Bracken3 had been wiped mostly away, leaving just the horse’s ass, there the stalking rifleman of Horn Hill4 had been half-melted by a rocket strike. On the Colour Serjeant’s5 prow, only five of the seven eyes of Ningauble6 could still be seen, and them just barely. They were fire-blackened and partly incised by shrapnel.

“I thought we were done,” he said, matter-of-factly, and licked his lips.

I’d thought so too. 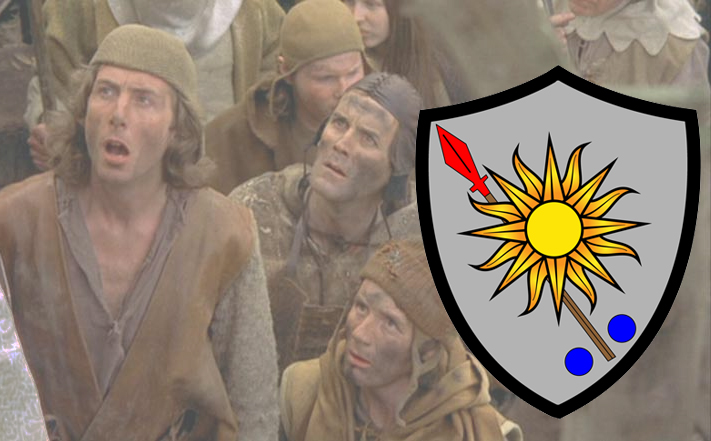 I stepped out and looked at the side of my own truck – the flayed man on our hull7 had been split in twain, cleft from crown to crotch by the blast of the IED that would have shattered us had it been an EFP. Further inspection found the ballistic glass at the squad leader’s hatch spiderwebbed with cracks, though not quite shorn through. Our slat armor was mostly intact but had been pulled out and rolled, like a giant had wrenched it off and begun to coil it.

Corporal Tarp8 shambled over quietly from where the Volstagg tracks19 had parked. There was a cigarette burning unevenly in his mouth.

“I think I shat myself,” he said. A little gout of smoke vouched for his sincerity.

“If it hadn’t been for those gun runs,” I said, shocked at how level my voice stayed, “you’d have worse problems than shit in your pants.”

Tarp and Hunt both looked over at the three sitting helos. They were all some variant of Cymek Garuda III9, an airframe that was old before any of us had been born.

“Who the fuck are those guys?” Hunt asked, giving voice the question every exhausted, beat-to-shit man in the squadron was asking.

“Was that a Dothraki door gunner?” Tarp asked, ignoring the question.

I wasn’t familiar with the badge over their engines. It was a bloody spear, behind a flaming sun, on an ash field with two blue orbs with a black border. 10

“No fucking idea,” I said, stealing the cigarette from Tollett’s mouth and taking a drag. “Mercenaries? One of the new PMCs? Don’t know, don’t care. But I am gonna buy ’em a fucking drink.

The convoy from Kitab al-Azif11 to Acererak12 took its first casualty less than fifteen minutes after we’d stepped off, not a half-klick from the FOB. Contact started with harassing fire and a half-assed IED set off ten seconds too late, but things got progressively more insistent after that. By the time we hit Cho’n Delor13 and crossed the Hlal14 it had become more gauntlet of punishment than thunder run.

Depraved thoee murderous little brown men might be, but they’re clever, and they’re not lacking for balls. They waited until we were too far to turn back before really starting the fuckery, and showed up ready to fight.

Not bad for savages who wipe their ass with one hand.

The next fifteen klicks were an eternal, surreal two hour two-year crawl of noise and bowel-gripping terror. A slurry of incoming rifle fire washed across our armored hulls in repeated gusts like intermittent storm surges, punctuated by the recurring detonations of RPGs and occasional thunder of an IED you could feel from your skull down to your taint. We pushed into it like a dying man walking with his head down against a downpour so thick he’s given up trying to see as he staggers forward.

To this day none of us can explain why they failed to score a mobility kill.

Every port, sponson, and turret down the line was rocking, damn near cyclic. We were painting this place with their blood, but they wouldn’t quit. It would have been a repeat of the Symbaoe15 run all over again if those ragged old birds hadn’t shown up and started making gun runs when they did, unasked for, unrecognized, completely unexpected – fucking welcome, of course.

The helos started working over the upper windows, gunners scouring alleys and hidey-holes, pilots ripple-firing rocket pods into structures half a thousand years old. They wrecked that place, likely saving our lives in the process.

By the time we laagered and they landed there with us they were more hole than helo, but against all laws of probability, they managed to stay aloft long enough to suppress the ambush. They were burning mother-fuckers down like it was cool, like they wanted to go black on ammo, and then eventually they did. After that they were turning racetracks overhead while the crew chiefs blazed away with rifles and sidearms, and at least one of them, a mean-looking fucker with long hair and a brightly colored plate carrier, threw a wrench.

The sudden quiet was as overwhelming as the fight had been, for a moment or three, then you could begin to hear the protests of brutalized vehicles, the curses of bewildered men truly surprised to be alive, and me, puking out the back ramp and trying desperately to prevent anything from spewing out the other end.

It was a wonder some of those trucks had managed to crawl into the improvised cantonment area at all. The tracks and helos looked scarcely better, with huge holes torn in side skirts, fist sized chunks of armor clawed away, radio masts sheared off. Oil and other fluids clotted thickly in the dirt beneath a score of vehicles. It looked less a laager than it did an armor boneyard.

I took a long, last drag on Tarps’s cigarette and handed it back as the Garuda crews unassed their birds. They came ambling over in an improbably unwounded group, no two of them dressed alike but all of them well armed. All bore the bloody spear, flaming sun, and two blue balls on their shoulders.

The big northerner in the lead had a clipboard in one hand, a sling-less carbine in the other, and a sharp pointed villain-caricature of a mustache under his nose. It took me a moment to register that there were cookie crumbs caught in the top of his webbing.

Flanking him were two men. The first, a short, hard knot of barrel-chested Tsojcanthi17 with a chequy-gripped 1911 holstered on his chest. The second, an amiable but dangerous looking hillman with a truly astonishing mustache across the bottom half of his face, a visored, horned helmet (I shit you not, he had horns on it) pushed back on his head18, and a short-barreled scattergun slung under his arm.

“Afternoon gents,” the tall one said brightly, as though there wasn’t puke on my gear or shit in Tarp’s pants or bullet holes in every vehicle in sight. The two nodded their greeting.

“We’re House Morningwood,” he continued, which was no fucking house I or anyone else had ever heard of. He proffered the clipboard and waggled his eyebrows. 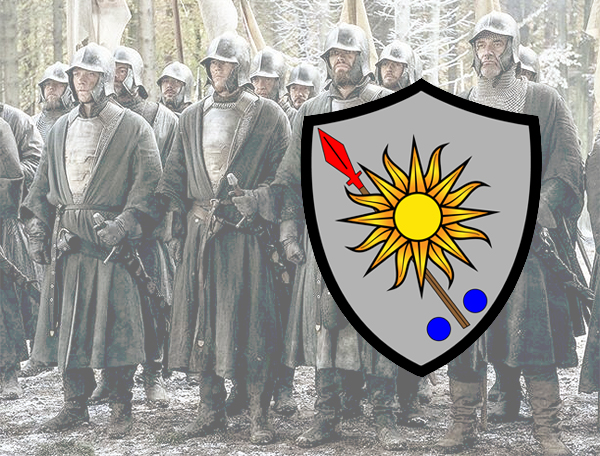 1Hyle Hunt – Ser Hyle Hunt is a knight sworn to House Tarly. He was part of a wager among several young knights to see who could bed Brienne of Tarth, but later in the books turned out to be an honest man and a brave knight. His last appearance was chapter 42 of A Feast for Crows, and he was about to be hanged by outlaws. We won’t know if he lives or not until the next book is released. If GRRM doesn’t die on us first. Hyle Hunt.

2House Hunt – a noble house of the Reach sworn to House Tarly. Its sigil is a brown deer, bound and slung under a pole, on white. House Hunt.

3House Bracken – the Brackens of Stone Hedge are sworn to House Tully of Riverrun. Their sigil is a red stallion (here written as a warhorse) on a gold field. House Bracken.

4Horn Hill – the seat of House Tarly. Its sigil is a striding huntsman (here written as a rifleman instead of an archer). Horn Hill.

5Colour Serjeant – a respected rank of sergeant in commonwealth countries, a position traditionally earned with acts of valor. Spelled  –our to give it a British feel (to go with the show and the War of the Roses ambience) and as Serjeant because that’s how it’s spelled in the books (as it is in some real militaries now, and was sometimes during official correspondence during the Crimean War, WWI, etc.) Colour Serjeant.

6House Ningauble – doubtless founded by (or at the behest of) the wizard Ningauble, “Ningauble of the Seven Eyes”, patron of the barbarian hero Fafhrd…the larger half of Fritz Lieber’s Fafhrd and the Grey Mouser stories.

7Flayed Man – the primary charge of the sigil of House Bolton, which is sworn to the Starks in the Northlands. The Flayed Man.

8Probably related to Glanno Tarp, of the Trygalle Trade League, in Malazan.

9Garuda – Garuda are one of many sophonts in China Miéville’s world of Bas-Lag (as in the novel Perdido Street Station): they’re a nomadic avian race “…from the Cymek desert.” They’re fierce hunters who resemble humanoid birds of prey. Garuda. The Garuda III helicopter is based on the Bush War era AIII, specifically those used in Rhodesian Fireforce missions.

11Kitab al-Azif – the Arabic name for the Necronomicon from Lovecraft’s Cthulhu mythos. Alternately translated as the “Book of the Howlings of the Desert Demons” or “Book of the Approacher,” written by Abdual al-Hazrad, “the Mad Arab.” Kitab al-Azif.

12Acererak – a Dungeons & Dragons reference from way back. Acererak was a lich in the 1975 adventure module Tomb of Horrors. He’s an old school iconic monster, and was referenced in the book Ready Player One. Acererak.

13Cho’n Delor – a “fiend-haunted ruin” of a city on the east side of the River Main between the First and Second Cataracts in The Black Company series.

14Hlal – a river near Lankhmar, from the Fafhrd and the Grey Mouser series.

15Symbaoe – a ruined city in Africa, once thought to be myth, but discovered by European explorers in the 1800s. Symbaoe (#6).

16Described that way because we just described it that way.

19Volstagg Persuasion Services, a PMC headquartered in the Red March.