Three Rings for the Elven Kings

There were three elven rings of power. There names were Vilya, Narya, and Nenya.

Now these were the Three that had last been made, and they possessed the greatest powers. Narya, Nenya, and Vilya, they were named, the Rings of Fire, and of Water, and of Air, set with ruby and adamant and sapphire; and of all the Elven- rings Sauron most desired to possess them, for those who had them in their keep-ing could ward off the decays of time and postpone the weariness of the world.

But Sauron could not discover them, for they were given into the hands of the Wise, who concealed them and never again used them openly while Sauron kept the Rul- ing Ring. Therefore the Three remained unsullied, for they were forged by Celebrimbor alone, and the hand of Sauron had never touched them; yet they also were subject to the One.

Three Rings for the Elven Kings

If you’re reading this you probably already know how the rhyme goes.

The Elven Rings of Power were: 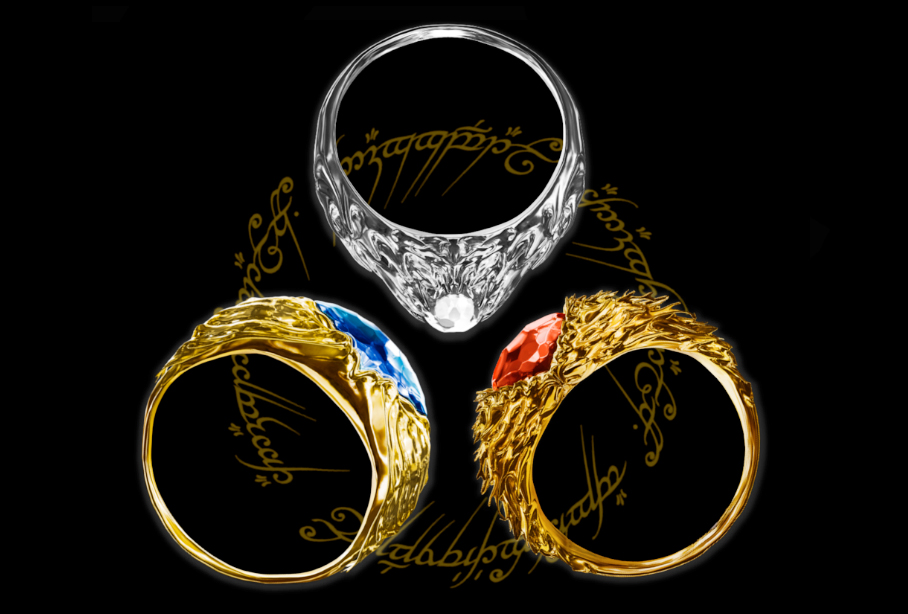 Elven Rings of Power, artwork by…actually, we’re not sure who to credit with the artwork. If you know, let us know in the comments. Vilya, Nenya, and Narya. 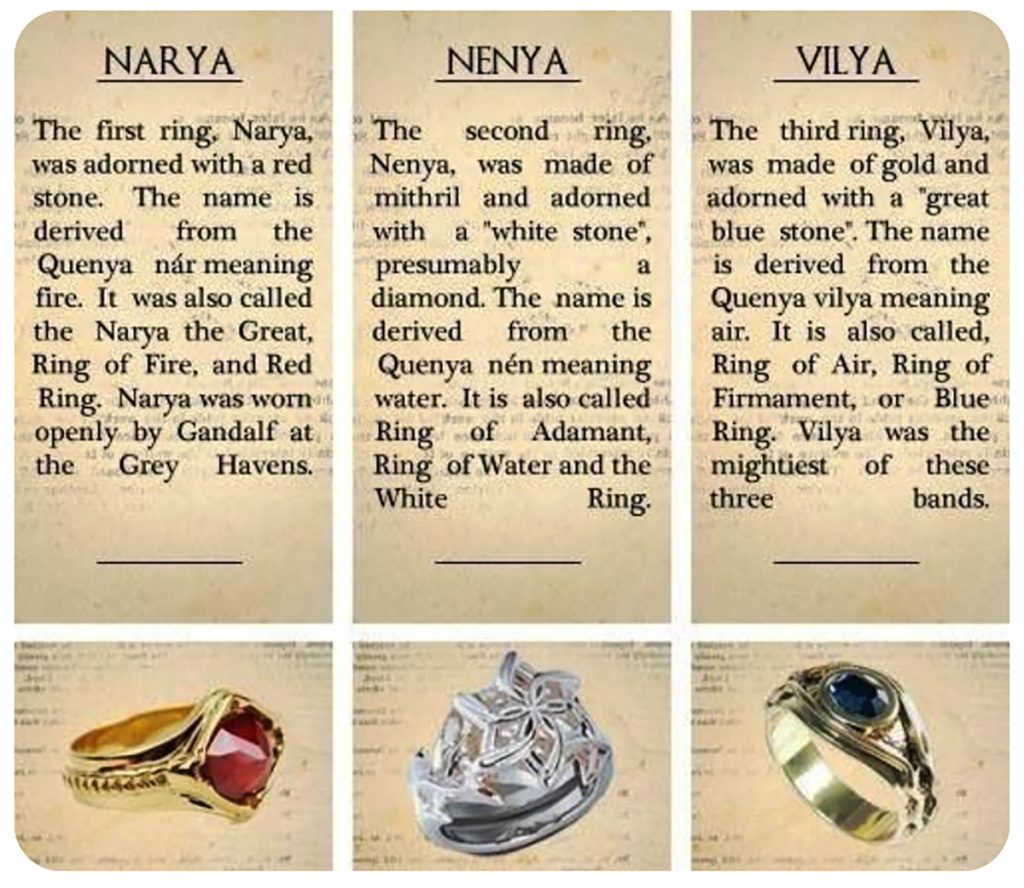 Now the Elves made many rings; but secretly Sauron made One Ring to rule all the others, and their power was bound up with it, to be subject wholly to it and to last only so long as it too should last. And much of the strength and will of Sauron passed into that One Ring; for the power of the Elven-rings was very great, and that which should govern them must be a thing of surpassing potency; and Sauron forged it in the Mountain of Fire in the Land of Shadow.

And while he wore the One Ring he could perceive all the things that were done by means of the lesser rings, and he could see and govern the very thoughts of those that wore them.

But the Elves were not so lightly to be caught. As soon as Sauron set the One Ring upon his finger they were aware of him; and they knew him, and perceived that he would be master of them, and of all that they wrought. Then in anger and fear they took off their rings.

But he, finding that he was betrayed and that the Elves were not deceived, was filled with wrath; and he came against them with open war, demanding that all the rings should be delivered to him, since the Elven-smiths could not have attained to their making without his lore and counsel. But the Elves fled from him; and three of their rings they saved, and bore them away, and hid them.

Vilya, the Ring of Air, was Elrond’s Ring. Before that, it belonged to Gil-Galad. Vilya’s powers helped hold Imladris against the Enemy.

END_OF_DOCUMENT_TOKEN_TO_BE_REPLACED

Nenya: the Ring of Galadriel

Nenya, one of the three rings of power, was Galadriel’s ring. An adamantine band with a white stone, it was known as the Ring of Water.

END_OF_DOCUMENT_TOKEN_TO_BE_REPLACED

Narya, the Ring of Fire was one of the three elven rings of power. Specifically, it was Gandalf’s ring, worn and wielded by Mithrandir (while both Grey and White).