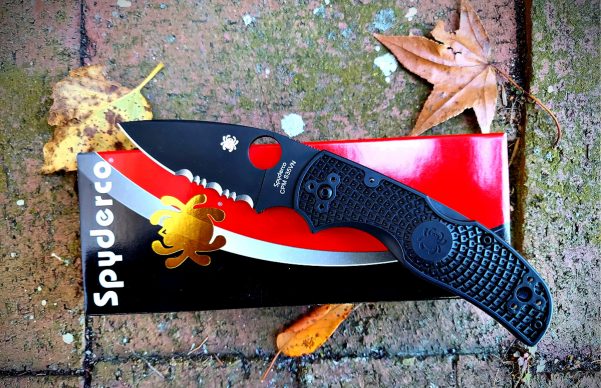 For people who are after a wider palate, Spyderco offers the variety that they crave, with a massive selection of designs and materials. And this is a company that listens to its fans, being very interactive with their customers.

Enter the Spyderco Native, a design that has been around since the late 1990s, I believe 1997, unless I’m mistaken. I’ll be upfront, the Native is among my top five knife designs on planet earth (incidentally, this knife is marked as being made in “Golden, Colorado, U.S.A. Earth). It is that good!

Okay, so what makes this knife so great? I’ll tell you.

The size is fairly compact, with the Overall Length being seven inches, and the blade length 3.125 inches. The thickness of the blade is .125 inches, which is stout enough to be durable but coupled with the Full Flat Grind, thin enough to be an excellent slicer. In fact, this spear-point blade slices as well as some of the custom blades that I have.

The closed size of the knife is 3.93 inches. The fact that it weighs only 2.65 ounces in the FRN (Fiberglass Reinforced Nylon) version means you can forget you’re even carrying a knife. The FRN easily slides out of the pocket when you draw this knife.

Here’s where the variety comes in: There are other handle materials available, including G-10 (weight is 3.7 ounces), and while that is a small gain in weight, this knife is still extremely lightweight. The G-10 offers a satisfyingly “grippy” texture while not being abrasive, and offers a stronger, stiffer handle. A version exists that has a carbon fiber handle as well.

To add to the variety, this model can be had with a few different steels, including S30V, S35VN, 440V (S60V), and S110V. A word about modern steels these days: we really are spoiled with the variety of steels that are available.  Huge strides have been made in recent years, and these days, we enjoy high corrosion resistance and amazing edge-holding ability. I am told by some people that S110V is particularly difficult to sharpen, which offsets the advantage of its edge holding ability.

I’m focusing on the Native 5 version, which was introduced in 2012, for this article. The steel is S35VN, which is an improvement on S30V in that it is easy to grind (which makes it economical to manufacture), offering good corrosion resistance. It is also not difficult to sharpen compared to other steels.

As mentioned, the Spyderco Native 5 features an FFG spearpoint blade that is superb for slicing, and is just a shade over three inches. It’s a nice length for the vast majority of cutting chores that most of us run across in our EDC tasks. I’ve used mine for cutting everything imaginable: A swimming pool liner, cardboard, zip ties, plastic, tape, packing materials, wood, fishing materials…the list goes on.

The older models had a pronounced swedge, which I like very much. The Native 5’s swedge is much more subtle, and some people might not even notice it unless it was mentioned. It runs from near the tip of the blade, most of the way back to the handle, and is not nearly as apparent as on earlier models.

The spine of the blade features jimping, which really helps keep the knife in the user’s grip. Just below that is the opening hole, which is large enough to be easily accessible and makes for an efficient and rapid way to open the knife.

The cutting edge on my Native 5 is what Spyderco calls PS (Partially Serrated), with serrations toward the handle, and the front 1/3 of the blade being plain edge. I figure it’s the best of both worlds.

These days, I always carry two knives; one in each front pocket on either side of my body. I like one blade to have a plain edge and the other knife to be at least partially serrated. Serrations, especially the ones from Spyderco, cut like an angry wife’s tongue!

The most recent Native that I purchased is the Native 5 with FRN handle (designated Lightweight, or LW). I really love the texturing that Spyderco uses for their FRN handles, it offers excellent purchase while sliding easily out of your pocket when you draw it. The fact that it weighs next to nothing doesn’t hurt, either.

The ergonomics of the Native handle are a thing of beauty and genius. It locks into the hand like few other knives I’ve ever held! The choil features jimping just like the spine, and between the two, really helps lock the knife into your grip; there will be no slipping.

Aside from allowing a better grip, the choil also lets the user
choke up on the blade for a more controlled, precision cut.

As good as the Native feels in the standard, Sabre grip, it feels just as good in the reverse (ice pick) grip, lending to its versatility. The pinkie finger fits right into that choil, cementing the handle into your grip. I’d feel very comfortable stabbing with this knife, which makes it viable for self-defense should one be in fear of one’s life.

Something to be mentioned about Spyderco is their attention to detail and their fit and finish. Universally, it is excellent, even on their more utilitarian knives. I’d classify the Spyderco Native 5 LW in the “utilitarian” category. Mine wears the all-black finish, which I find pleasing. Everything just comes together so well, and looks good doing it!

The Native is no exception in this area; all of my Spyderco knives have a very nice fit and finish. I will say, though, that such things are merely window dressing for me because I put more stock into performance than how pretty the knife is. Just the same, I won’t turn away a nicely crafted and finished knife, it’s icing on the cake.

The Spyderco Native uses a lock that harkens back to the “olden days”: the back lock, as the company refers to it. Or, as many of us called them years ago, the lock back. Either term is correct.

This is a very strong, sturdy, reliable method of locking the knife open. I’ve never had one fail (and I’ve owned well over a half-dozen Natives over the years).

Moderate pressure is required to disengage the locking mechanism to close the knife, reducing the danger of the blade accidentally closing. As I said, I’ve never experienced a failure or accident with this mechanism and like it quite a lot. In fact, I’ve had liner locks and frame locks on far more expensive knives fail where this one didn’t miss a beat.

The action is very smooth, with the FRN version needing no washers. The blade does require a purposeful opening, so those who enjoy flicking their knives open may be a bit put off by this. This isn’t to say that it’s difficult to open, but just that this mechanism requires slightly more pressure than some others. No big deal.

The Native 5 clip is what I’ve heard some describe as a “spoon” shape. It’s simple, retains the knife well, and does everything asked of it, I would not change a thing.

The clip can be positioned for tip-up for tip-down carry on the left and right side of the knife, which gives four carry option positions.

One of the best things about the Spyderco Native is that it’s made in the USA and doesn’t cost an arm and a leg. Mine was around $112 at New Graham Knives.

It’s not fancy or sparkly, but it works exceedingly well, cutting everything I’ve ever asked it to with no problem. It offers a solid locking mechanism, coupled with outstanding ergonomics and quality materials.