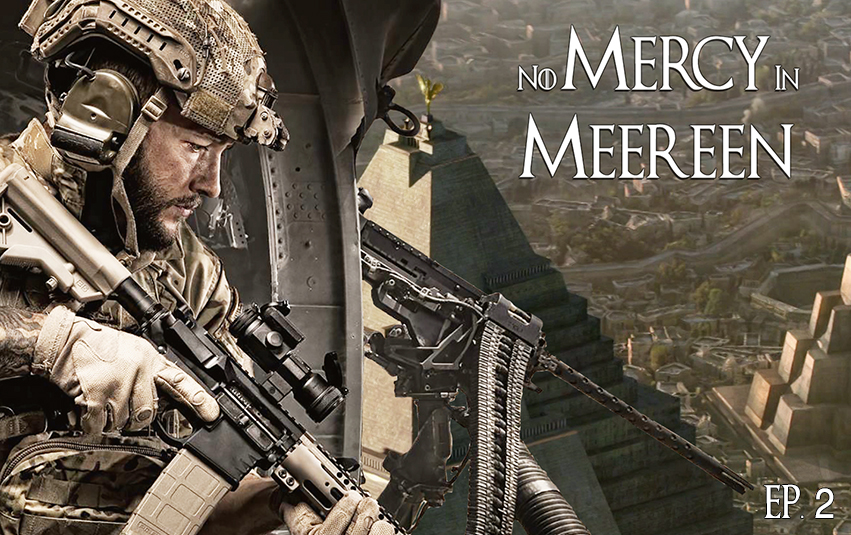 The Merciful Man was buckling his helmet when the lights went out. Rolling blackouts still plagued the city, seemingly now worse than ever. Few had power more than one hour in ten, and only those with sufficient wealth or capacity for violence were able to maintain sufficient fuel stocks to keep backup generators running all the time.

No Mercy in Meereen
Episode 2  | (by David Reeder)

His helmet was cut high, with rails over the ears and bungee webbing across the top. It was stained with the blood of whomever had worn it before him and tilted slightly sideways on his skull. His plate carrier bore the same sort of gruesome mark. Although it fit, he looked somehow ridiculous.

Ser Jorah Stone was watching him check his kit, face hard and unforgiving. He shook his head slightly.

Somewhere in the souk beyond the walls a dog was howling plaintively. The noise was cut off by the flat sound of cleaver dropping.

Jorah clenched his fist and spat.

Ghiscari love dog, the Meereenese more so than most. Jorah Stone loved dogs too, just not charred on a spit.  This was in no small part why he hated the Ghiscari, and the Meereense in particular.

He turned back toward the wall, glaring fiercely at the men atop the parapets. They were taking too long, in his eyes, to raise the portcullis. With the winches unpowered, they were doing it the same way it had been done half a thousand years before. Back when men waged war by hacking each other to pieces, before anyone had had heard of VBIEDs or razor wire chicanes. Before a century of civil war and famine had utterly ruined one of the greatest cities of Essos.

Before they’d changed the maps from Bay of Dragons back to Slavers Bay.

“Get that fucking thing up!” he shouted over the idling engines, waving his arm savagely at the portcullis. He was glowering, but his right eye had yet to close halfway the way it did when he was truly angry. His right would all but shut when slaughter was truly in the offing, and his soldiers knew it.

“We need to move, ere the Bloody Masters begin to stir.”

He’d been prowling the courtyard restlessly while the men made their final preparations, an old dog caged in a fighting pit. Thousands of wretched Meereenese were waiting on them and would not eat until they did—hate them as he did, he did not intend to keep them waiting long.

A lean man with severe features and a square head, Jorah had broad shoulders, more ash than soot in the bristle brush on his head, a brow knurled on one side like a wood knot, and mismatched eyes. One eyebrow was slightly higher than the other, as was the eye beneath it. A cleft-like scar carved his left brow in half. That scar meandered up his forehead and scrawled its way down across his temple to disappear beneath the hair underneath what was left of his ear.

Most peculiarly, his eyes didn’t match.

That wound had all but caved in his skull, and nearly killed him. It should have killed him in fact, everyone said so. It had put him in a coma for months and changed the color of his eyes, as he found when, improbably and to the consternation of those tending him, he woke up. One was green as a perfect olive, the other brown as gold-banded agate. Heterochromia the maesters had told him. He’d had to say it half a hundred times back then, before he’d fully recovered the ability to speak, and he still didn’t quite understand it.

Ser Jorah Stone had been called many things over the many years of a storied career, including Hard Jorah Stone and the Bastard of Bronzewater, but mostly his soldiers now just called him Hardhead.

A Zorse was parked in the looming shadow of an armored giant, the Garron beneath that of the sally port. The driver of the smaller vehicle clambered back up from the Garron’s driver’s hole suddenly as Jorah drew near, face as white as curdled whey. He pulled his helmet off desperately and began vomiting down the side.

It wasn’t the first time that morning that Racallio Drahar, the Armored Cavalry Assault Vehicle’s improbably quiet and badly hung over driver, had puked before or during a mission. The men told off to ride inside began to complain and jeer. While he retched the Zorse ground sideways on its tracks, the 600 horsepower grumble of its engine throbbing like the vein crossing the temple of Jorah Stone’s skull.

Vast laughter like shelves of ice cracking rumbled across him as the former Infantry Fighting Vehicle clattered to a halt. Jorah shut his eyes and clenched his teeth.

“Gods be good I’m in no mood for that nonsense,” he muttered.

He craned his neck back to look up at the chortling giant taking such delight in Racallio’s misery.

“Choke it off, Gawr Weg,” he said, his arm extended almost straight over his head to knife hand the giant. “Choke it off, or I’ll choke it off for you!”

Gawr Weg was a real giant, a literal giant, not one of big boned halfbreeds found north of the Weeping Water. It – he – had been born beyond the Skirling Pass and recruited by the Chained Men at Hardhome. The giant towered nearly 30 hands above Jorah, himself a straight-backed six feet at the shoulder. Despite the size difference, Gawr Weg closed his immense mouth and somehow contrived to look chastened.

Drahar’s plight reminded Stone to check on his other two drivers. The virtual certainty of a TIC on this mission made the effort that much more urgent.

To Be Continued in Episode 3.