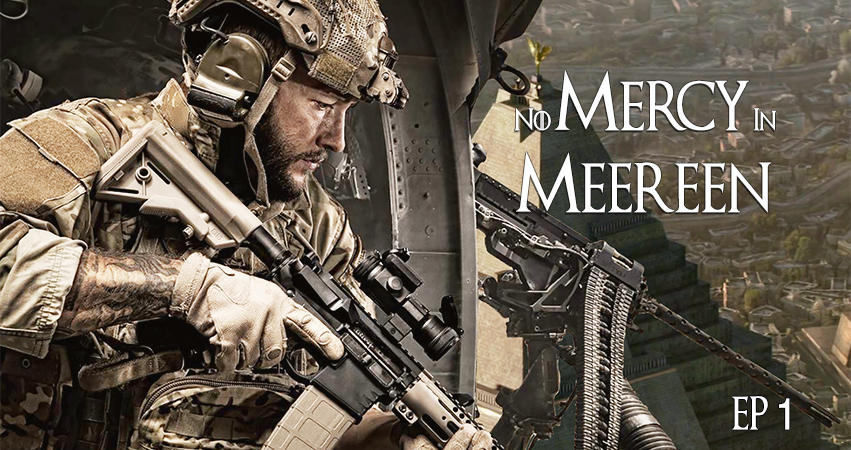 What would it be like if Meereen went the way of Mogadishu, with modern weaponry? It would be a shitshow, that’s a certainty. This is a story about a PMC dealing with just such a shitshow (serialized in several parts).  Some of them may or may not wear the sigil of House Morningwood.

No Mercy in Meereen

Long streams of tracer licked out from the shoulders of the Great Pyramid, lethal and languid.

Moments later came the distant chatter of machine-guns, echoing across the sluggish brown water of the Skahazadhan. With it came a stirring of breeze, heavy with the river stink, old mud and new sewage, and the filthy brine of Slaver’s Bay.

It was not strong enough to drive away the stink of blood, shit, and cordite, however, so that is what the Brazen Beasts smelled last.

Five of them were dead or dying, sprawled beneath a persimmon tree in a vast clay pot. They were Boar, Bear and Bull, Vole and Manticore, wearing the traditional bronze-colored masks of Meereen’s ancient city watch. All but one were splashed with gore and gasping their last. The last one was dead and already gathering flies. Blood spread quickly in a widening pool beneath their ruined bodies. Vole wore the brains of Boar, whose mask and helmet was wrecked by the trio of bullets that had rampaged through his skull.

A sixth Brazen Beast stood above them, huge and impassive and still as stone. The eyes behind his Rooster mask were cold and uncaring, staring at the dying men in their masks. He’d tucked his helmet beneath one arm to better cool a sweat-soaked mass of black hair in the night air. His arms were bare to the shoulders and covered with acne like an affliction. There was a Caggo style Arakh with a folding stock and a Myrish optic atop slung negligently across his chest, and a long-barreled grey pistol holstered on his hip with a half inch drop. Strangely, his middle finger was indexed along the lower receiver; the index finger of his right hand was severed at the first knuckle, and his little finger missing completely.

One other man stood above the dying, and this one wore no mask. His great, curving hook of a nose was wrinkled in disgust, though whether at the stink of piss and shit or at the dying men themselves was not immediately clear. He was weathered and lean, with a battered old Ork5 slung barrel down beneath his arm and dressed in a Qyburn Precision assaulter’s uniform. Mottled as it was in ash, mud and sinter hues, his urban ManyCam uniform would have made him very hard to see in the cloud-throttled moonlight if not for the patch on his shoulder.

Other shooters, similarly clad, stood watchful and ready over more corpses in the darkness. Suppressed weapons will still make noise, and the sounds of dying men almost always draw attention.

“You should have stayed bought,” the hook-nosed man told Vole quietly. Despite the Ghiscari mask, his accent was Iron Islands, voice as smooth as cutting a throat. The patch on his arm was round and dark, the sigil on it a green, flaming chain on a smoke gray field; the arms of a young but storied Private Military Company mercenary unit nominally headquartered in the Crownlands across the sea.

Vole shook his head in mute denial, trying and failing to lift his arm in supplication. Half his forearm was shot away, the bones laid bare to the night. Bull began to gurgle. He was choking on his own blood.

Vole turned to Rooster, head shaking like he was palsied. Rooster stared back unmoving. Bull groaned and attempted to stand. A suppressor pressed against his forehead froze him in place.

“It never need have come to this,” said the Iron Islander sadly, and it sounded like he meant it. “No harm would have come to your city. None to you, or your friends. All you needed to do was look away, then spend the rest of your life rich.”

“Silly, stupid man,” Rooster said softly. It was a deep and brutal Ghiscari voice, and it carried. “You know there’s no mercy in Meereen.”

To Be Continued in Episode 2.