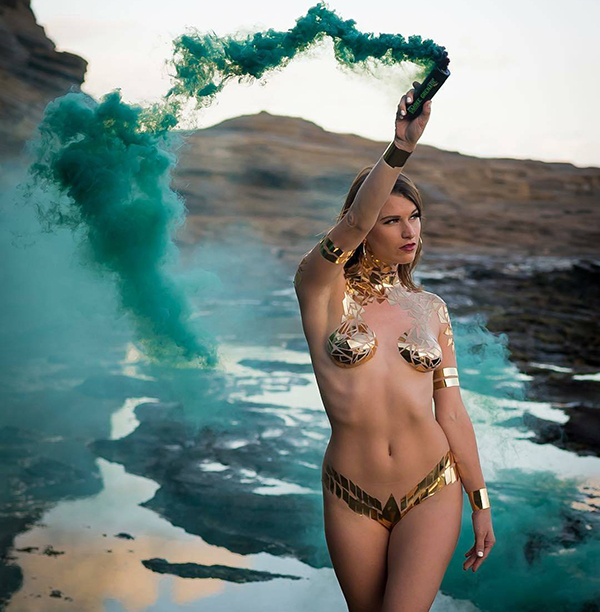 Now and then, you find yourself in need of letting everyone within several city blocks know of your whereabouts. Maybe you’re a stranded hiker outside of Machu Picchu and just got your gear lifted by Peruvian bandits. Now you need to signal for help. Or, maybe you just really like a flamboyant entrance to Mom’s annual 4th of July cookout. Either way, Enola Gaye USA (@enolagayeusa) makes a whole line of smoke grenades to make just such efforts easier.

Note – cover photo not some hottie from a khalasar. That’s @_lucyinthesky_  from @stevens_travels. It is known.

They do this with a line of wire pull smoke grenades. Whether you’re signaling that search & rescue helo or are just looking for your exit distraction after a buddy inadvertently pissed on someone’s shoes in an IHOP after some solid hours of alcohol consumption, these babies will help. They’re the closest thing to the military’s Mk18 smokes that we in the civilian world can lay hands on.

I happened upon these about a year ago while looking for some novelty type shit to pass out to the groomsmen at my wedding. Hindsight being what it is, I probably shouldn’t have passed them out to a bunch of functional alcoholics at an event my new in-laws and Grandmother would be attending. It did make for some cool wedding pics though.

When I first ordered them, they seemed to be marketed toward a paintball and airsoft crowd, but truthfully, I see much potential for these little gems. They are relatively inexpensive, cool-burning, require no open flame for ignition, and produce a metric fuckton (actual mathematical measurement) of thick colored smoke. They would be perfect for hikers, boaters, hunters, or generally anyone that likes to hang out in the unpopulated parts of the country where cell phone service is as flaky as your ex-girlfriend.

Of course, there are also those purposes for which they’re used by the military, and in the paintball and airsoft arena, i.e. for concealment of movement. That could very well apply in an active shooter scenario or similar Event. Not that I’m advocating one should EDC a smoke grenade, but I certainly see the potential for their inclusion in a “trunk kit”.

If not used for concealing movement, they’d make for an excellent distraction. Any part of the House Morningwood King’s Guard should certainly have a few on hand. You never know when the Hound will show up looking to eat every chicken in the tavern and you have to make a hasty exit.

And speaking of distraction, for all you LEO’ out there, Enola Gaye also has a flash grenade that is not an ATF controlled device available. While they’re not designed for, nor does Enola Gaye advocate for their use in, a real tactical environment, some Police Departments have been exploring their use for crowd control measures. Plus, they are an extremely cost-effective alternative for training purposes (and have their own PALS-compatible LBE, too).

While the flash grenades are not intended for full-blown retail sales, the smoke grenades can be had from a lot of different websites, including eBay. Google it! Any LEOs interested would be able to purchase directly from Enola Gaye with an end-user agreement and some proof of sworn capacity.

Check Enola Gaye Training out on Instagram HERE for all of your LE/MIL flash & smoke training needs.