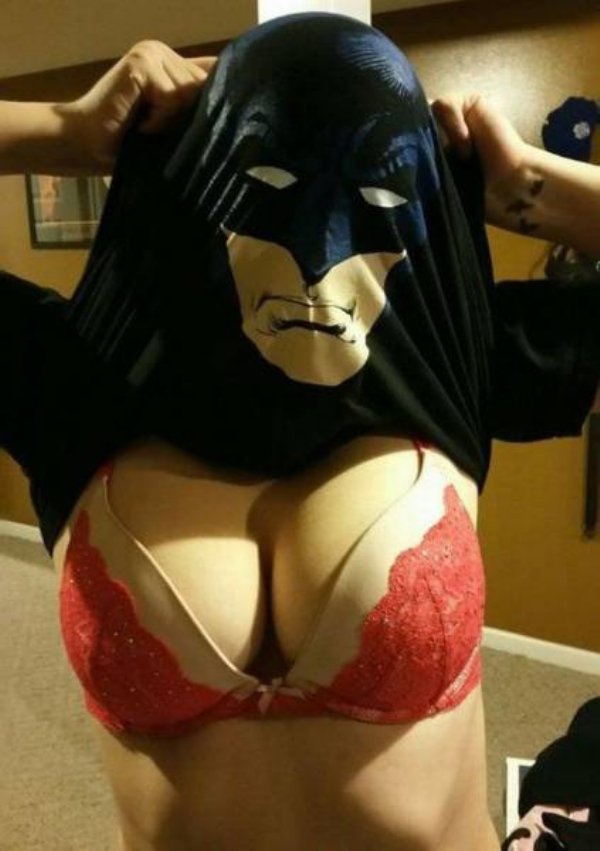 The success of Avengers: Infinity War this last weekend got us thinkin’. AIW is now the biggest opening movie of all time, and although that doesn’t necessarily mean the most profitable, you know damn well it’s gonna make a lot of money. Hell, it’s already past $250 million, and it hasn’t opened in China yet.

Anyway, we’ve decided to recruit our own team of supers in preparation for the Affinity War. All hawt females, of course, with the exception of Swingin’ Dick and Slim. Here’s who we have in our lineup so far.

With her ferrous skin and steely bewbs, she will be the brick of the team. Iron Maiden’s skin is rated by the DOJ at Level VIA and she once lifted an MRAP in each hand simultaneously, so don’t make a joke about the “wardrobe malfunction” she suffered that time doing battle with Magnetrix.

Ocelot is like Catwoman, only she’s faster and meaner and more willing to show off her bewbs. She may sound like a brunette Bernadette Rostenkowski, but she’ll gut you.

She’s immensely strong. And Asian. With green bewbs. She’s Asian She-Hulk. Because she doesn’t speak English and we’re not sure of her specific Asian provenance, that’s all we know about her so far. We don’t wanna be rude, you know. Asian She-Hulk once tore three supervillains into separate pieces for trying to go all chikan on her.

This busty super woman is blonder than Black Widow and way hawter than Deadpool. You might think she’s Russian, but she’s not. Tatána Two-Gun is an ethnic Cossack, and we hope she doesn’t get brass burns anywhere in there.

Even better with firearms than Tatána, Ballistica began life as a gun bunny, but after she was bitten by a radioactive agouti she gained diurnal gunfighting powers, rapid healing, and prodigious bosoms.

Thundra doesn’t like pants and refuses to wear panties because (she says), they “slow her reflexes.” Luckily she has an enchanted belt adorned Yancey Harrington’s teeth (the giant, cyclopean Yancey, not the cousin who lives in Tucson) to keep her skirt from falling down. She also has a shaggy Mok sidekick.

his former MP served with the 503rd MP Battalion and went to Grand Lakes University as a botany major until her Meta gene turned. Venus Spytrap is now a professional reconnaissance asset with powers over all plant life. Who is apparently always cold, just look. Oh, and she stole Hellboy’s gloves.

Yes it’s derivative, but we haven’t thought of a better name yet. This curvy superheroine is fluent in Spanglish and saucy in demeanor, though since that time she was accused of cultural appropriation she’s been a less prone to vituperative invective. American Maid once killed a Badoon Jaeger cyborg with the dalekanium-tipped point of her stiletto heel boot.

Don’t get used to Banana Leopoardess. She’s really fast and we could use a speedster, but honestly, we’re going to get rid of this weird chick as soon as we can. Though that is a sweet headband.

This technophile super gal’s name actually stands for Chaingun Charlotte. Or it does now anyway, ever since the surgery. Chaingun Charlie’s bustier nipple-gatlings are boobalicious rotary barreled instruments of justice, capable of spewing out over 6,000 rounds of intertron-tipped bullets at variable rates of fire. She’s damn dangerous, but we feel a little weird hangin’ out with her, and it’s hard not to make Jame Gumb or Chelsea Manning jokes.

This article brought to you by a part of the Tactical Tyrion collection. Shop MadDuoCo – Help keep us equipped.

A European expat, Harlekiini Hana (as she’s known in her usually-frigid hometown) is the same woman once known as Jezebel Jester back when she was a villainess. She now carries a tremendous mallet with which to hammer bad guys into blood pudding. Despite accusations, Motley Maul has never been formally indicted on any charges of cannibalism, and yes she does have a great rack.

The Platinum Princess changes her costume as often as she changes her mind, which is to say often, but pack that Rubensque girl into a corset and you’ve got a sight to behold. Plus, she has a great smile, a superb sense of humor, and she can bench press a 12-wheeled Landmaster, all good traits for a superwoman to have. Don’t stare too long at her remarkable assets, though — her eyes are up there. It’s that sort of behavior that prompted her to quit the Global Defense Agency (though why she persists with such decolletage if she doesn’t want people looking at her boobs is a question we cannot answer).

Berserker Mouse is the smokin’ hawt naughty librarian of mutant superwomen, but when it’s time to fight, stand clear. She has slaughtered entire platoons of Viltrumites when in her frenzied state, and her Nth Metal nipple rings give her a wide array of decidedly un-mouselike superpowers.

We’re really hoping they’ll all get together for a sleepover and a pillow fight, but honestly, how realistic is that?

Prob’ly all they’d do is watch chick flicks and complain about us.

We sourced all those images from the interwebz, obviously. It never ceases to amaze us just what all sorts of stuff is out there. For instance, you might also want to check out Fish Bras, a part of our NSIAT series. Be sure to take a look at our online magazine when you have time.

Help us on our sacred mission. Bend the knee.