We’ve got a company here we’d like to shed a little more light on (if you don’t know them already); allow us to introduce you to RavenCrest Tactical. RavenCrest is a group of knifemakers out of Mesa, Arizona, with a desire to give the ‘world’s greatest tool, the knife, a modern makeover’.

The Ravencrest Tactical Vault-Tec knife (post-war of course) has proven to be one of their most popular styles.

“No matter what you do or where you go, we got your back. RavenCrest Tactical knives are tank tough and meant for hard use.” ~ Ravencrest Tactical

Note: this is an informational article intended to be a sorta FYSA. It’s not a Keen Insights knife review type post.

What type of Knives do they sell?

RavenCrest has a plethora of blades available on their site, from standard folders you’d see on the shelves of many knife shops like their Phantom or their Paisley Skull “Pop Knife.” But what really seems to be their bread and butter are “OTF” Knives (or Out The Front). Of course, you might also know the “OTF” as a “sliding knife, telescoping knife, or angel blade.” OTF Knives are a little more springy than other knives we’ve written about. 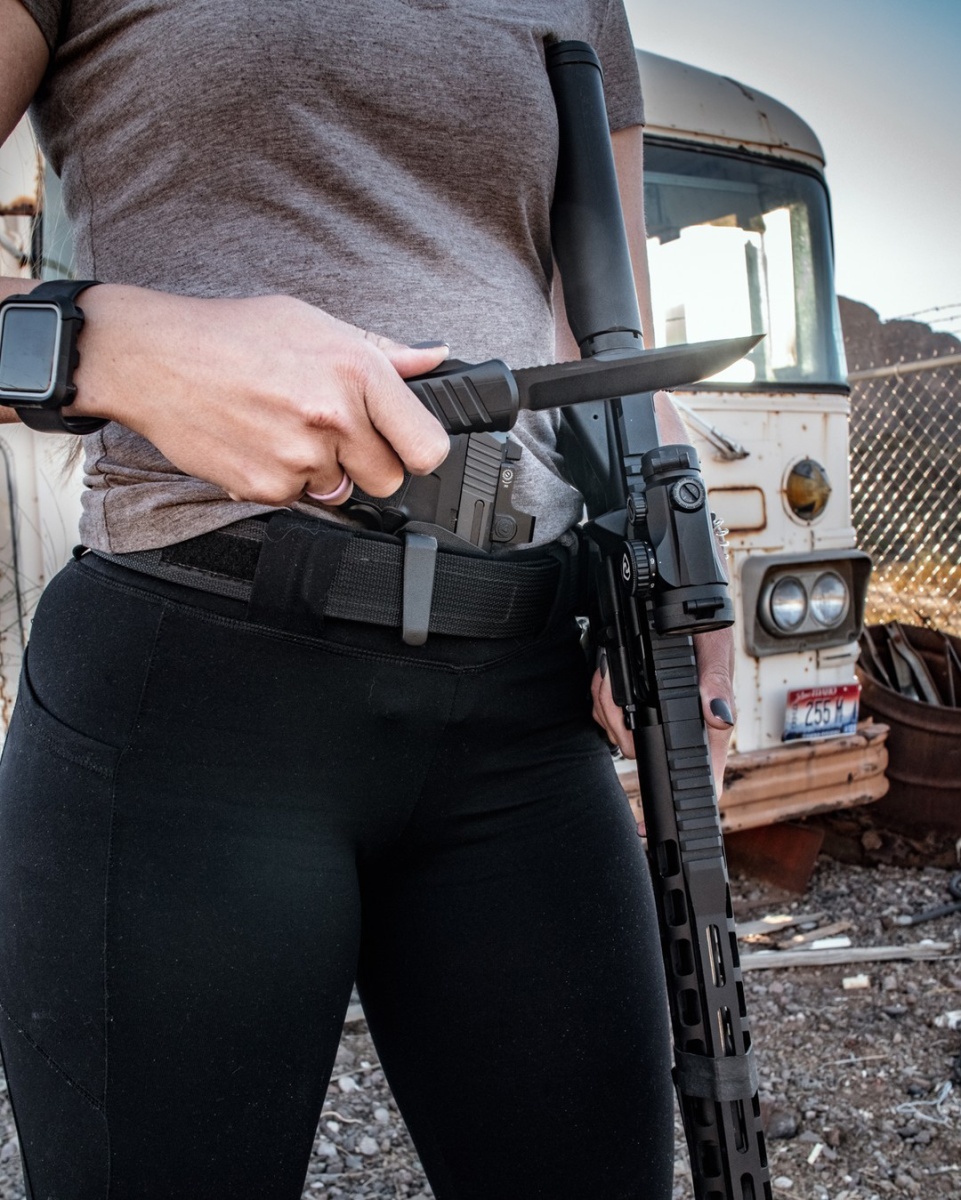 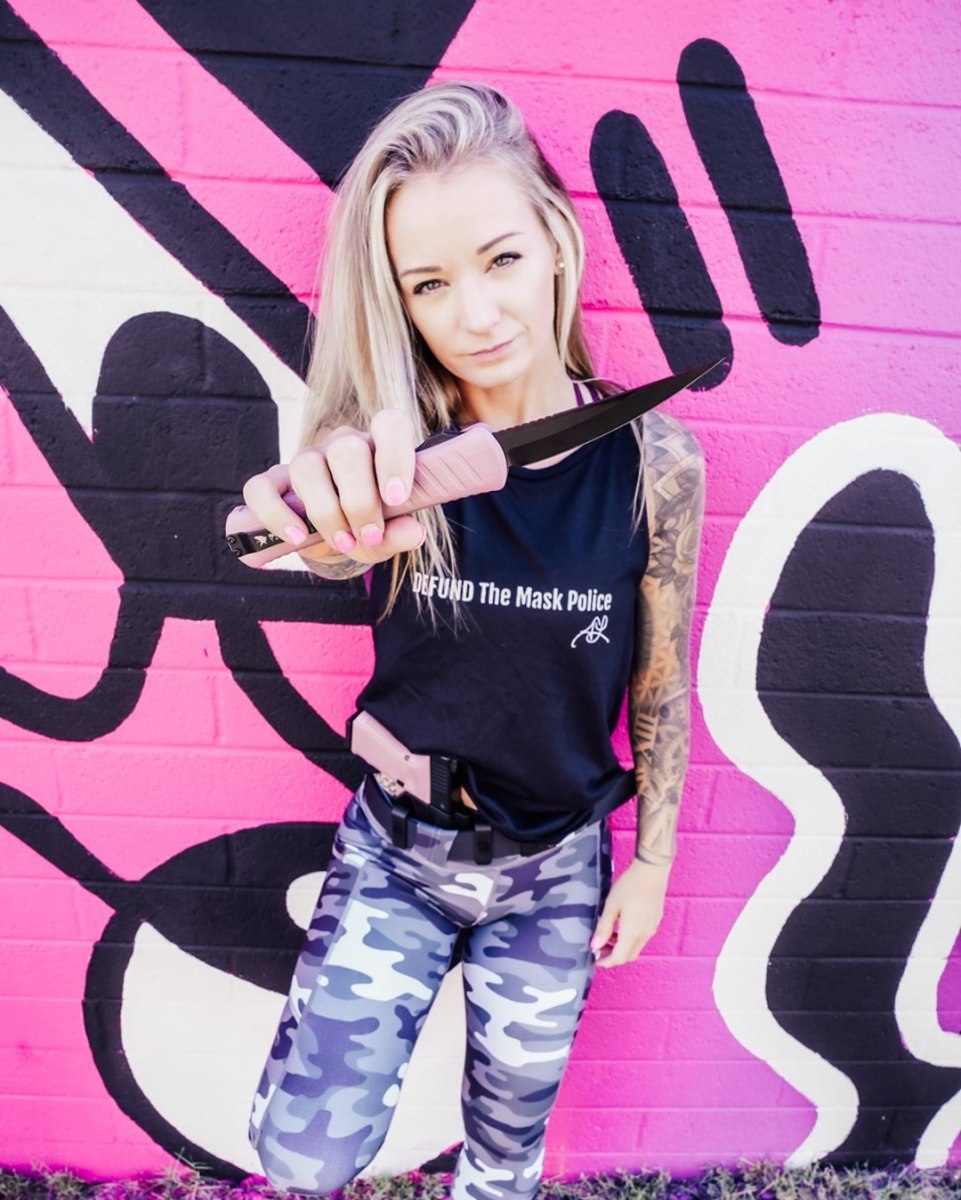 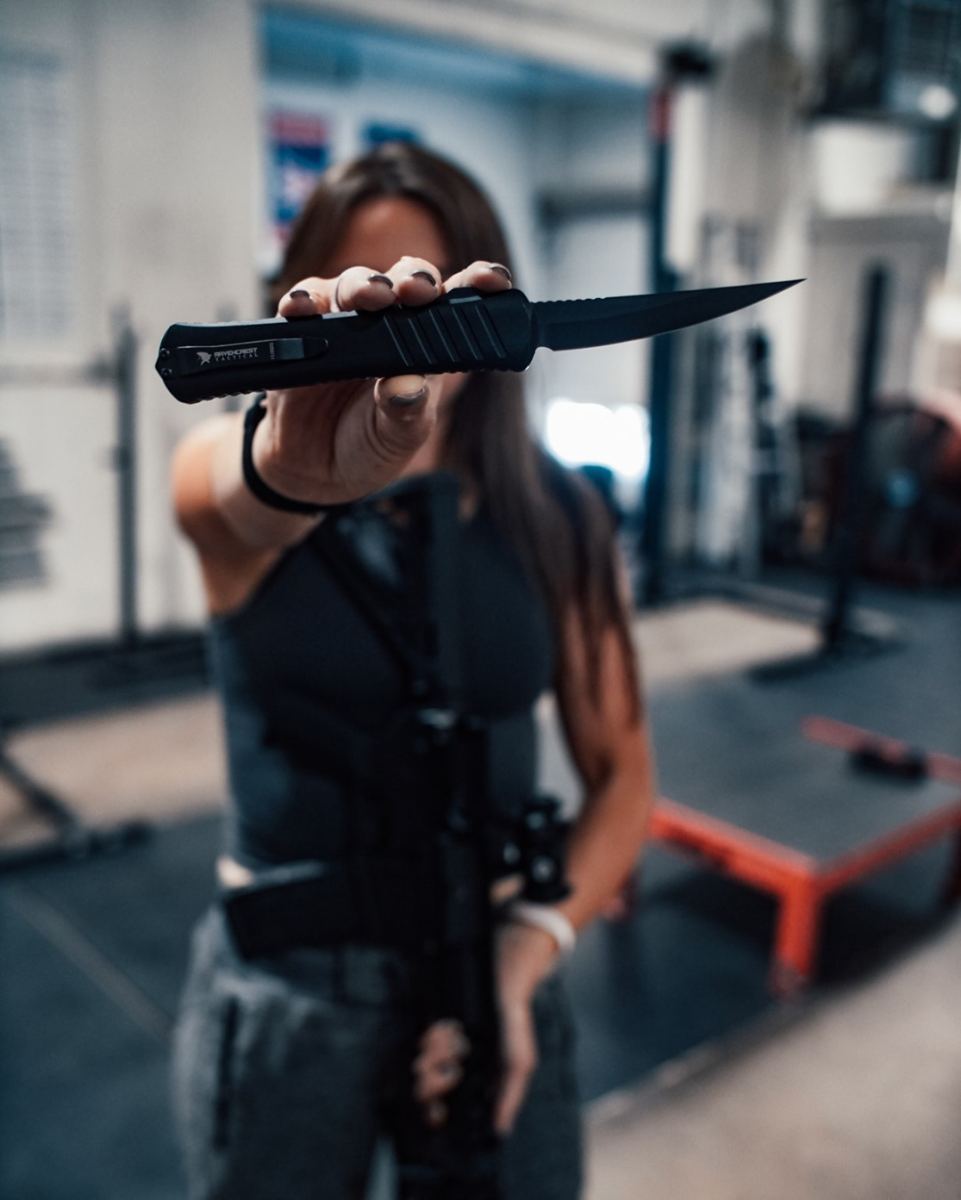 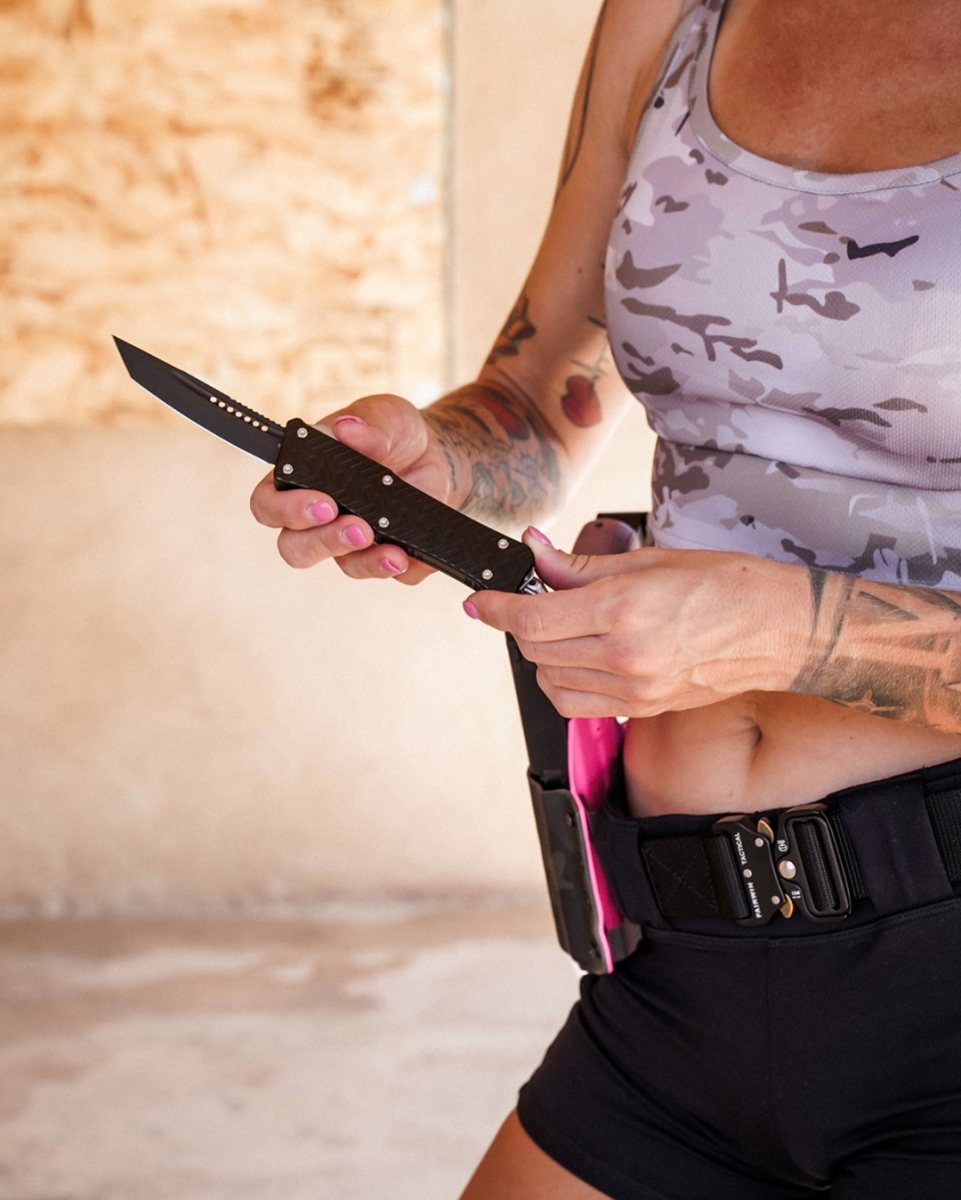 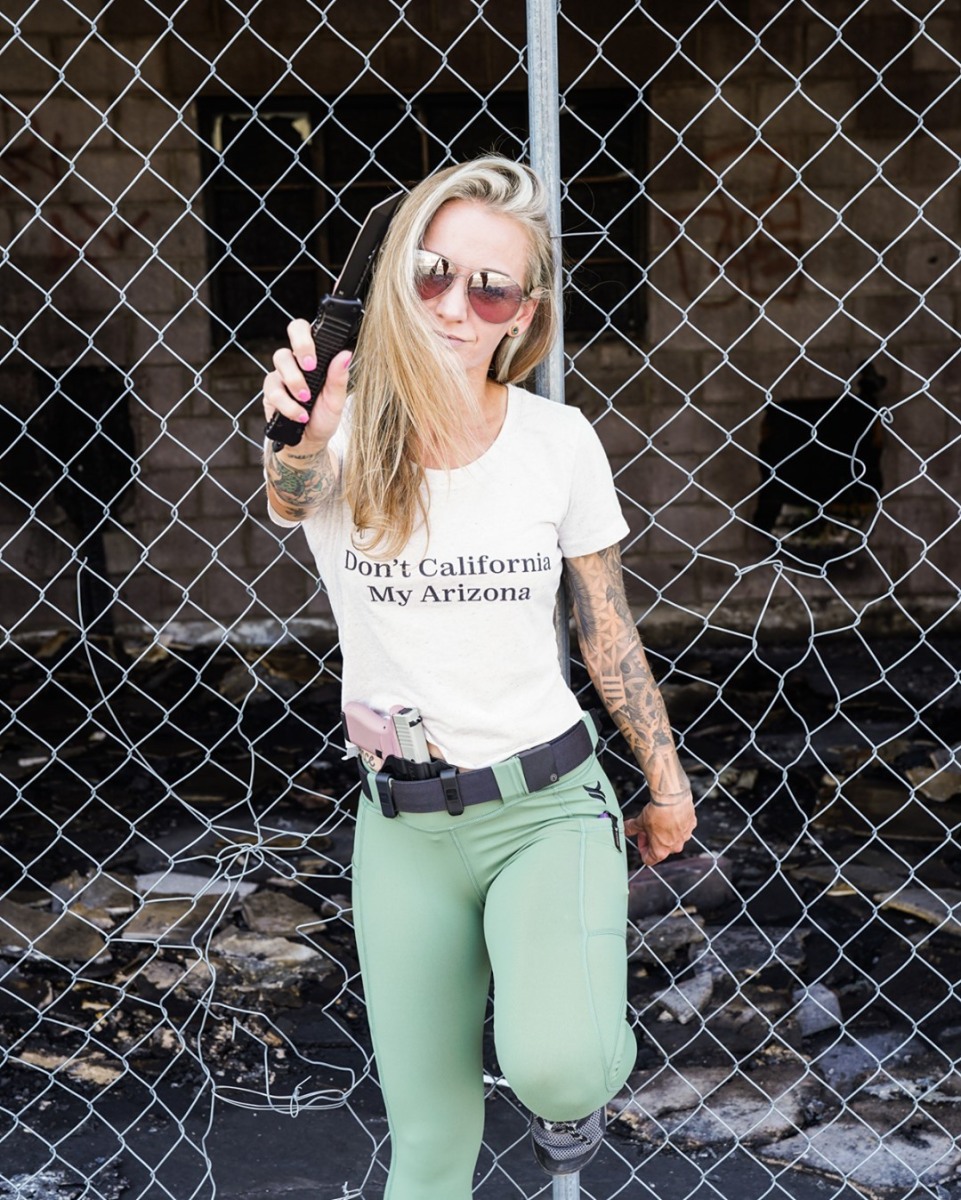 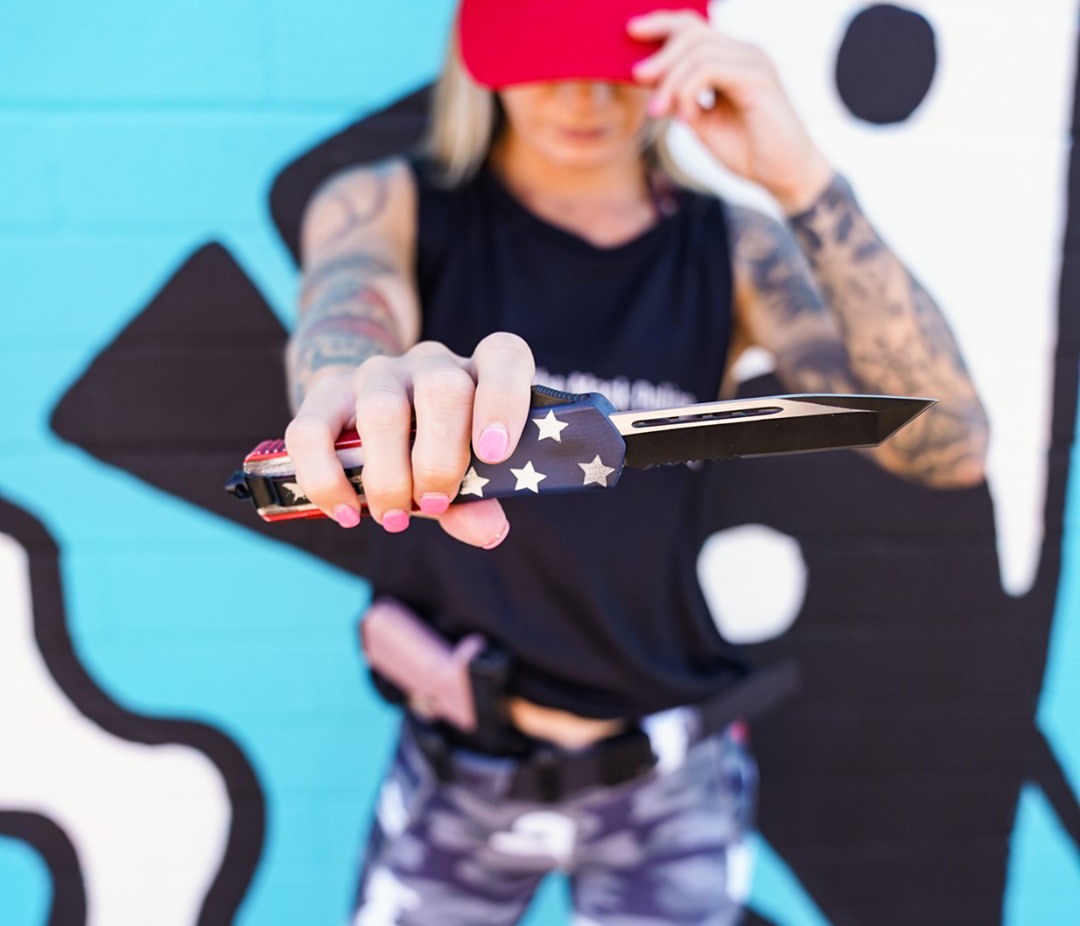 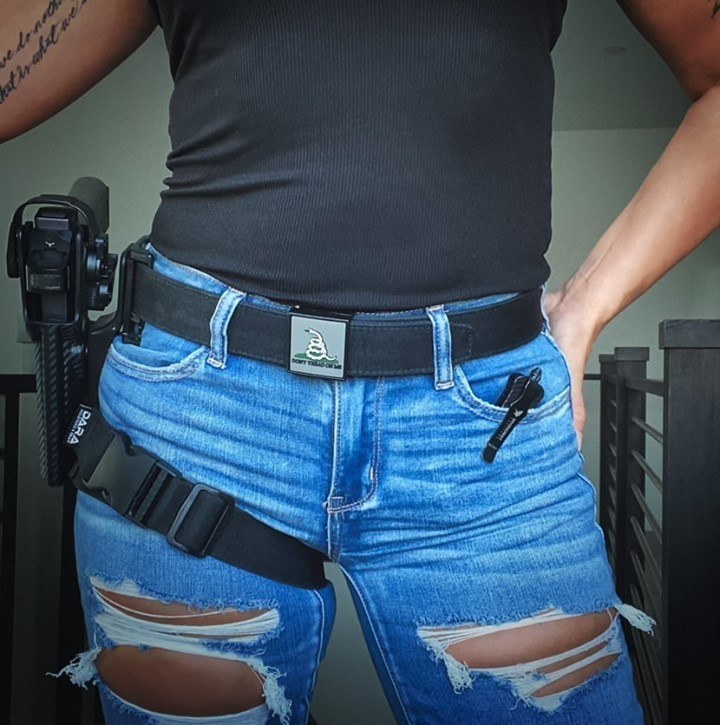 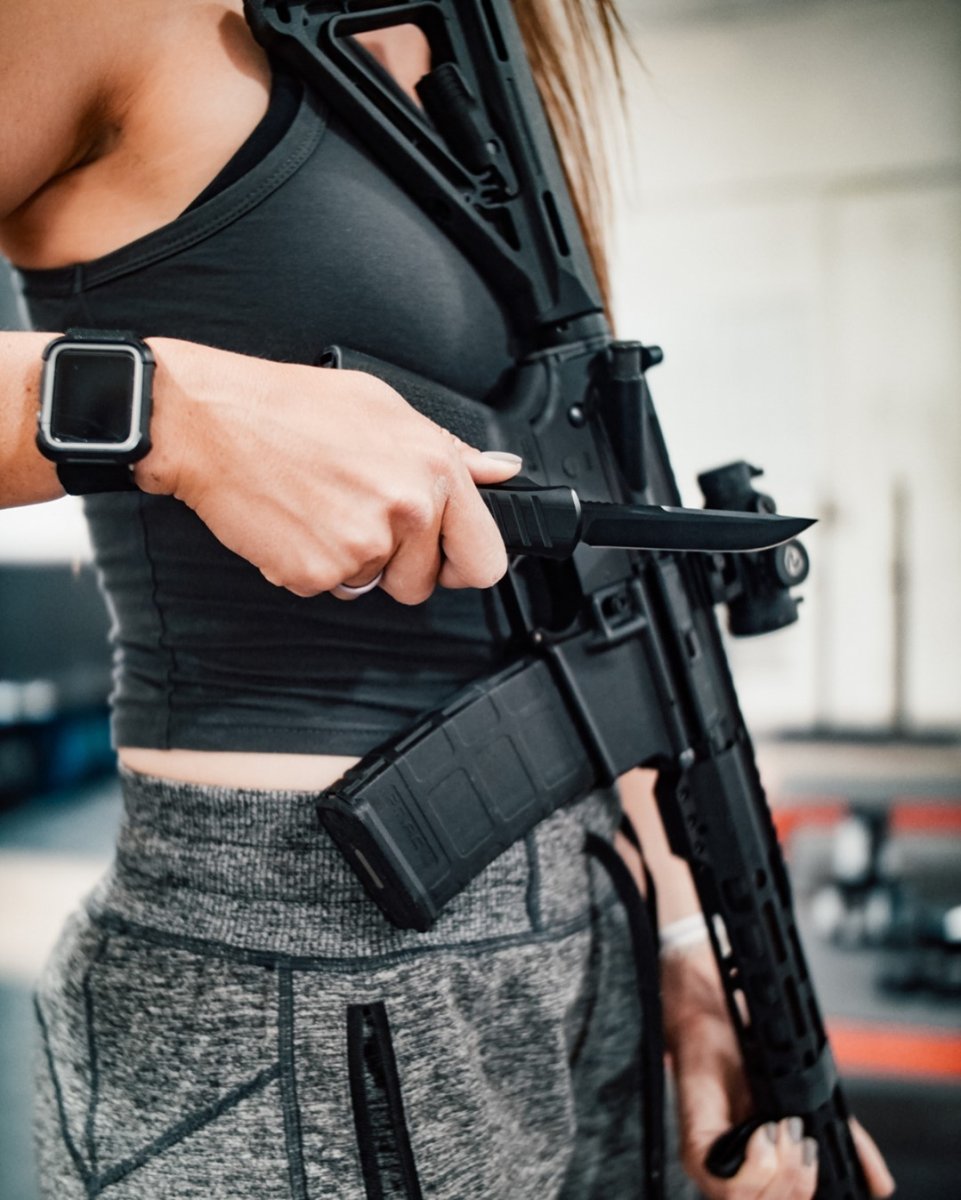 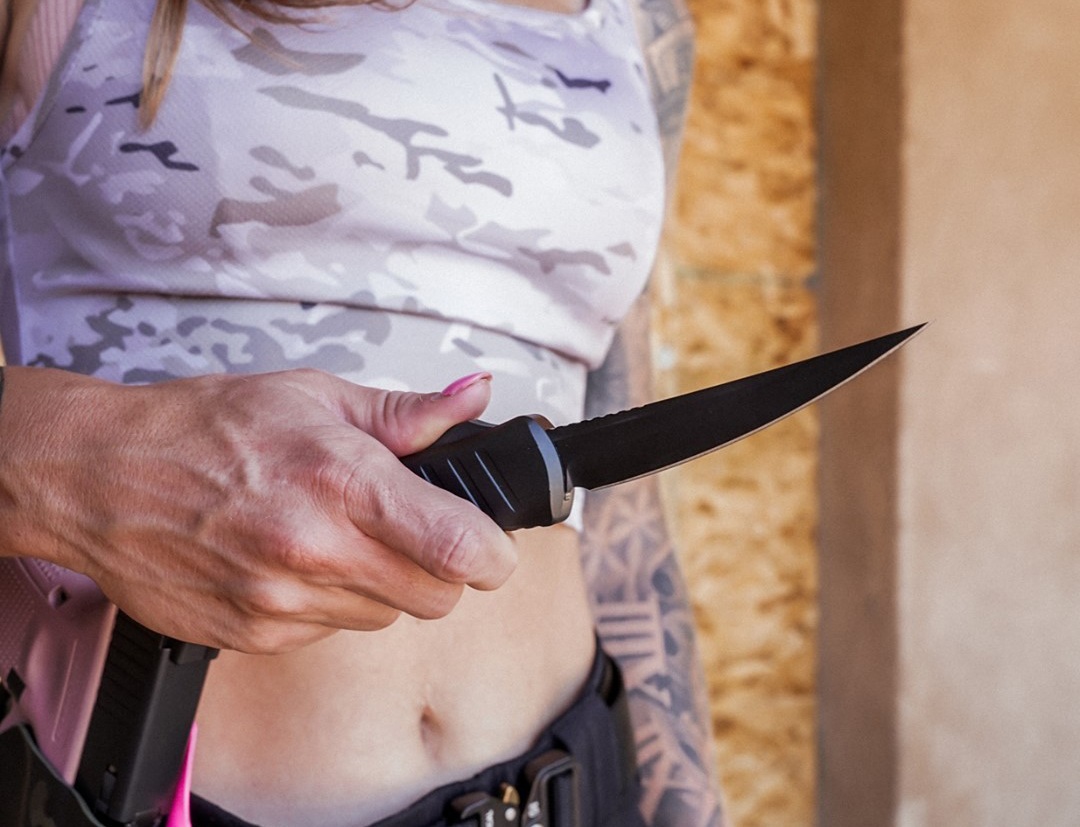 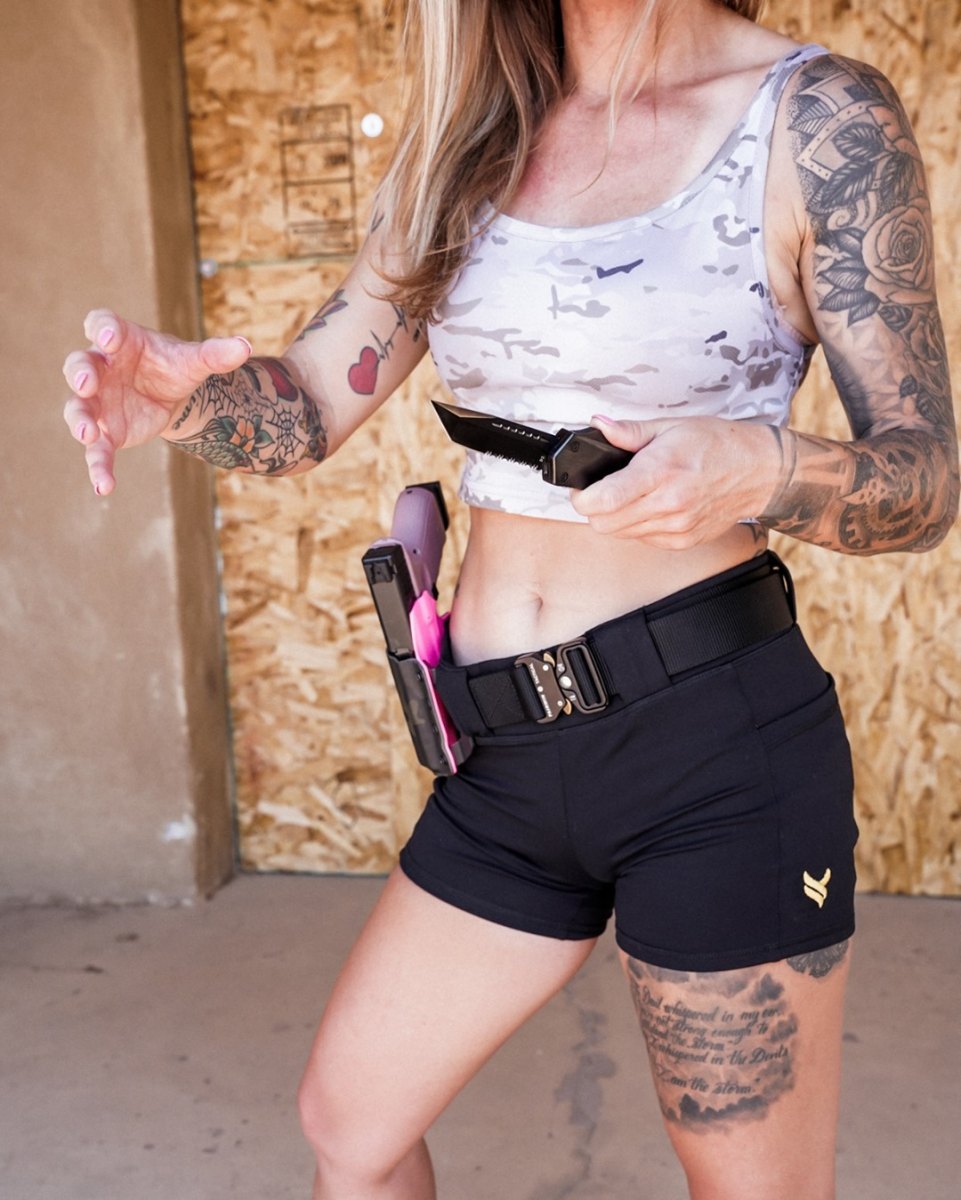 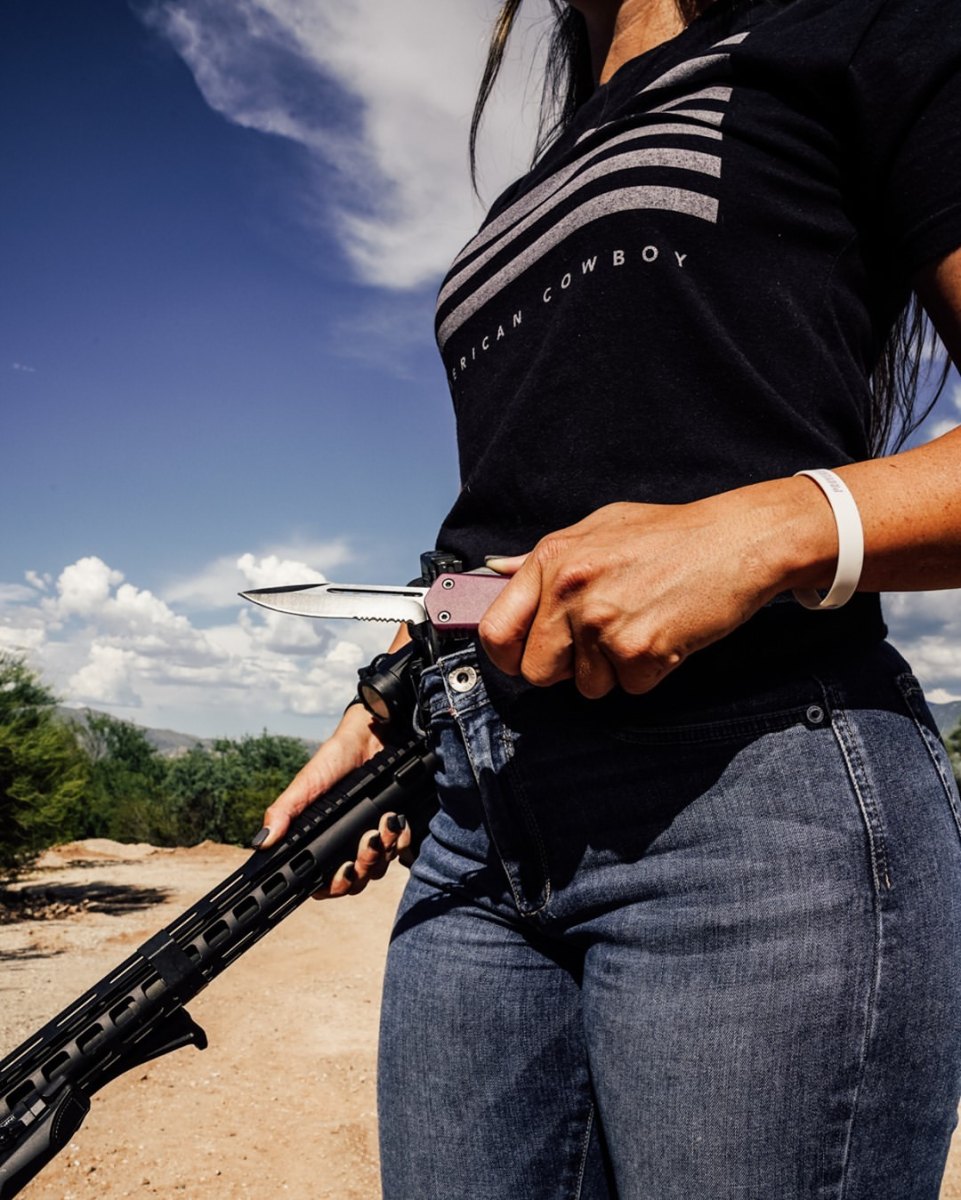 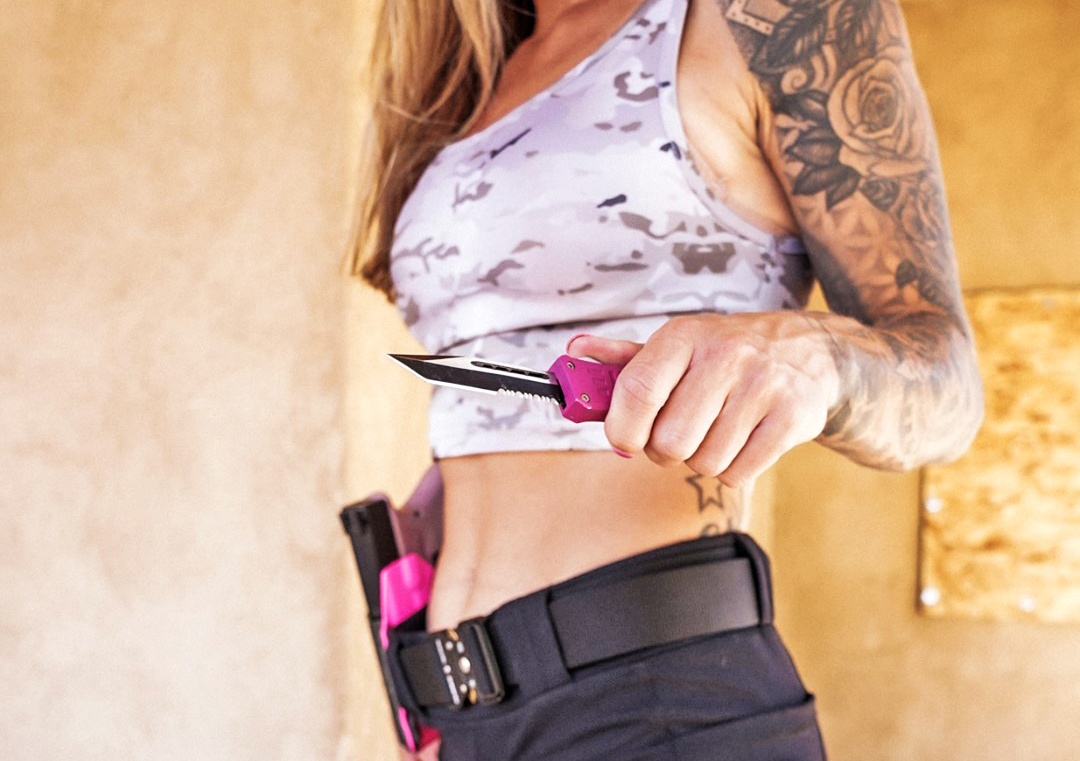 RavenCrest Tactical even has its own “Build Your Own Custom OTF Knife” program if you aren’t interested in a stock model. You pick one of the models listed above, but you get to change the “blade styles, handle colors, pocket clip designs & more.” Apparently, if you order the Custom Knife, it’ll be hand-assembled and shipped within 24-48 hours. Not too shabby.

This is the Enigma, an OTF Karambit.

All or at least most of their OTFs (that we saw) seem to be “double action OTF,” which use a dual-action mechanism that allows you to deploy and retract the blade by using a sliding button or lever. Double actions are supposed to be easier to operate than single, so that seems to be a plus!

Although some legal issues can arise with OTF knives, the myth that switchblades, OTF Knives, and Balisongs, or butterfly knives are illegal is a tad exaggerated. RavenCrest has a pretty nifty guide on their website for those of us inside the U.S. to dispel some myths and rumors. The guide doesn’t seem to have been updated since 2018, but things may not have changed since.

The TL;DR is you’re probably okay to get one, but you should look up your local laws whether you’re worried or not, just to be prudent. We’re not lawyers and can’t give legal advice; you do you, boo. We can only provide Badass advice, and our advice is knives are badass.

This map of where you can have an OTF Knife legally comes from RavenCrest’s website, but you’d do well to double-check in case anything has changed.

Knife maintenance is essential for any user who gives a shit about their blade; an OTF Knife is no different. RavenCrest Tactical actually has a pretty solid guide about knife care for their OTFs, although it probably applies to any of you out there with any OTF Knives.

They recommend you sharpen your knife lightly at least weekly; dull knives are dangerous knives, after all. RavenCrest also asks that you clean your blade regularly with tap water after a cutting job to remove residue. Make sure the knife is completely dry to avoid any rust issues. RavenCrest also says that you can use small amounts of gun oil to the blade to polish it, as long as you don’t get it into the OTF Knife handle.

If you’re interested in getting the info from the horse’s mouth, check out their guide here.

Don’t be a heathen; sharpen and take care of your knives.

So one of the big things that RavenCrest Tactical advertises on their site is their lifetime warranty. They claim that it isn’t a warranty that beats around the bush like some; they really want you to use the knives. It’s a tool, not something to put on display.

Even on their homepage in massive solid, somewhat aggressive font, they have “USE IT. ABUSE IT. WEAR IT. TEAR IT.”
They have it next to a picture of what looks like a simultaneously exploded and melted folder covered in ash. So it had a bad day.

Authors Note: After writing the sentence above about it being a tool and not being the knife not for being displayed but rather it being a tool, we found a nifty quote about the same thing from one of their Co-Founders.

“Our knives are better in your pocket than on the shelf. We have adopted the slogan “Tank Tough Knives” because we have literally tortured and abused our knives by demolishing cars in junkyards to hammering them into asphalt, and they just keep going. They’re not invincible, but they can take a beating…” – Derek Jordan, Co-Owner.

Like previously mentioned, RavenCrest is a group of knifemakers out of Mesa, Arizona. Here is a little about how a couple of the co-owners started in the knife world from their website.

“I got my first pocket knife for Christmas at age seven. It was a classic drop point folding knife with wood inlays. I remember being in awe, I carried that knife with me everywhere I went. I was always opening and closing just to look at it. The knife bug had bitten me. Knives became my passion and somewhat of an obsession. I have been collecting, carrying and, designing knives ever since.”

“When I was eight years old, my grandfather and best friend at the time died of cancer. The last time I saw him, he gave me a Barlow pocket knife that his grandfather had given him. My love for knives was birthed from this moment. The next month at the local swap-meet, a western bone handle Bowie Knife caught my eye. It was $29.00, which seemed impossible at the time. We were a poor family, and I made just $2.00 a week delivering papers. I saved up for the next 12 weeks for this knife (I used some birthday money).

This was the start of my extensive collection of knives. When we started RavenCrest Tactical, I told my partners every knife we sold had to be the quality that would make my grandfather proud; we would stand behind our knives 100 percent for the lifetime, just like Barlow Knives did for so many years.”

If you’re interested in checking out RavenCrest Tactical, go take a gander at their website. We hope you learned something or maybe found a new knife maker you might be interested in adding to your collection.