The Emerson Roadhouse — It’s Like a Pocket Samurai Sword 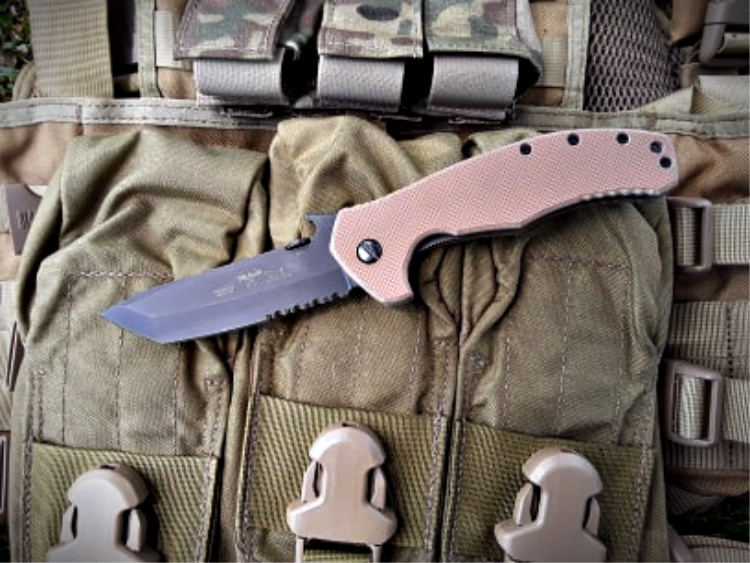 One thing to be said about Emerson Knives is that they do love variety! The company makes something for everyone who enjoys edged tools. Large knives, small knives; you name it — they’ve done it, and are doing it as we speak. This article will focus on the Emerson Roadhouse tactical folding knife. Let’s get the obligatory technical specifications out of the way first, then dive into the meat of the matter.

The blade is 3.8 inches long, which makes this one of the larger Emersons, with an overall length of 8.9 inches. The thickness is .125 inches and weight is six ounces.

The locking liner is made from Titanium and the non-locking side is stainless steel. The washers are Nytralon, which are impervious to harsh environments such as saltwater.

The knife that I own was made in 2013 and is made with standoffs as opposed to a G-10 backspacer like older models. Standoffs are currently used on most Emerson folders because they advantageously allow dirt and debris to pass through, which facilitates cleanup. Simply flush the knife out with water to clean it up if necessary.

My roadhouse has standoffs as opposed to a G-10 back spacer.

Check Out This Handle!

As always, the handle of this tactical folding knife is a marvel! Emerson never disappoints me when it comes to the handles of his knives. The finger grooves are always so well-placed, both giving comfort and also an extremely secure grip. Every time I review an Emerson knife, I use the same phrase: “This knife just melts into my hand as if it were custom made for my grip.” And every time, it’s true. The man is a pure genius when it comes to designing knife handles. The material used is G-10, which offers enough grippiness to keep the knife securely welded into your grip. 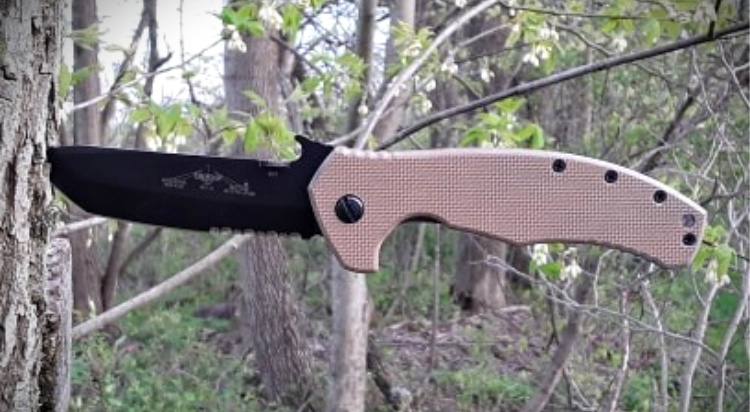 The finger grooves are perfectly placed, and the back of the handle hugs the palm of the user’s hand.

The handle is usable in both forward and reverse grip, feeling great either way. It is also a fairly thick handle, giving the user a hand-filling grip. In addition to filling the grip of your hand, it also fills your pocket. It’s not massive, but this is a knife that’s on the larger side.

One great aspect of Emerson’s knives is that the handle hardware is put together using Phillips head screws, making it very easy to service the knives should the need arise. The pivot screw (the one that holds the blade on) is a regular head screw that has a groove large enough that a coin can be used to make adjustments. That is a huge bonus because users can adjust the tightness of the pivot anywhere. I prefer my pivots to be slightly on the tighter side because it eliminates lateral blade play. Others like their blade to be so loose that it can be flicked open, but that often allows lateral blade
wobble. To each his own.

All About the Blade

The blade steel is 154CM, which is a standard for Emersons Knives (Mr. Emerson even uses this steel for his custom knives). This steel is hardened to 57-59 RC hardness, which makes it easy to resharpen, a popular aspect that many users enjoy.

Are there better steels on the market? Yes, but they often come with an increased price tag and some are more difficult to sharpen. Many people would like to see higher-end steel used, but at the moment, it does not seem that Emerson is going to make any drastic changes, and 154CM does work well.

The edge of the Roadhouse tactical folding knife is a V-Ground chisel edge, so there’s only one edge to sharpen, which makes sharpening easier. The point of the blade is tanto, so it is great for penetrating stabs, and the swedge adds strength and helps penetration. 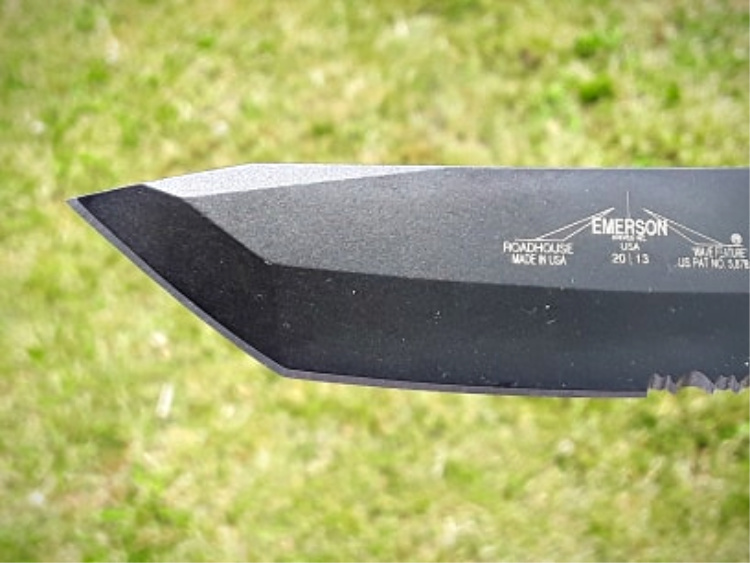 Look at that tip! It spells penetration.

Most tanto blade configurations have a straight-edged main portion of the blade, but that part of the Roadhouse blade is slightly curved. It’s so subtle that you have to look carefully to even detect it, but it’s there. This gives the blade a bit of “belly” for slicing tasks, and this knife is quite a slicer! The blade is also referred to as “low-slung” by Mr. Emerson, and it has a slightly upswept nature.

Opening the blade can be done in two ways: with the standard thumb disc or the Wave feature. I prefer the thumb disc most of the time unless I need the blade open very quickly. If instant deployment is desired, I’ll Wave the knife open. The Wave feature is the hook at the end of the thumb ramp above the blade. As you draw the knife, that hook grabs the edge of your pocket and it opens the knife as it’s coming out of your pocket.

As if that’s not enough, there is also a Mini-Roadhouse with a 3.4-inch long blade, as well as a Super-Roadhouse with a 4.2-inch blade. The Super version is almost like having a Samurai sword in your pocket!

This knife, overall, is a serious, badass knife! It’s really hard to put it any other way. It’s a large tanto and is up to big tasks. It’s made in the USA, which, in my opinion, is important these days. It certainly will perform utility duties, and is one of the more effective knives I can think of if a defensive weapon is needed. 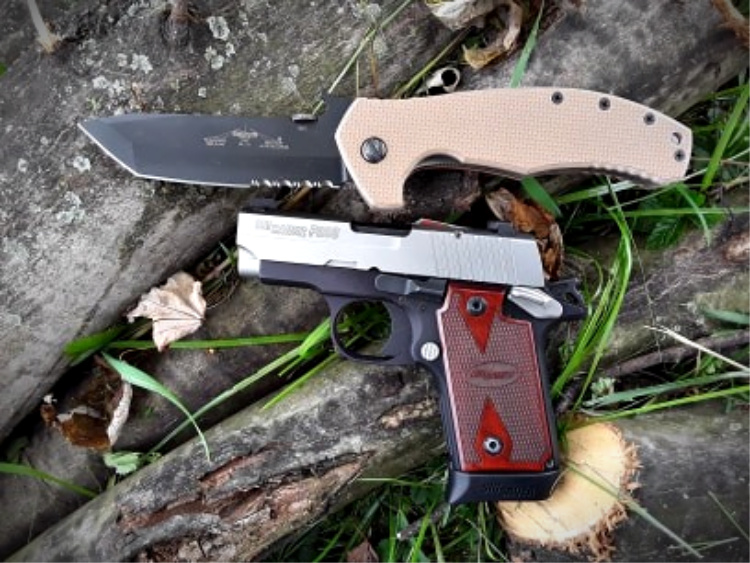 The Roadhouse is an excellent companion to a handgun for both urban and rural settings.

The only downside to all of this is that, at the moment, Emerson is not producing the Roadhouse tactical folding knife any longer. I’m not sure why.  Perhaps the sales had been down. Emerson fans have been very disappointed that this amazing tactical folding knife is not being produced at the moment, and I strongly suspect that this widespread disappointment will spur Emerson to do another run of these badass blades.

EDC Knife | Emerson Knives | On the Edge
Stuff and Things

Jim Davis served in the PA Dept. of Corrections for 16 ½ years as a corrections officer in the State Correctional Institute at Graterford and later at SCI Phoenix. He served on the Corrections Emergency Response Team (CERT), several of those years as a sniper, and also the Fire Emergency Response Team (FERT). For 25 years, he was a professional instructor, teaching topics including Defensive Tactics, Riot Control and Tactical Operations, Immediate Responder, and cognitive programs as an adjunct instructor at the DOC Training Academy. He was then promoted to the title of corrections counselor, where he ran a caseload and facilitated cognitive therapy classes to inmates. His total service time was close to 29 years. He was involved in many violent encounters on duty, including incidents of fatalities.